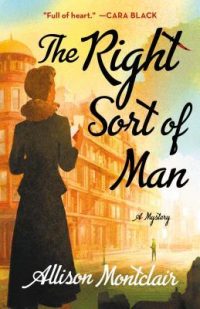 "A delightful immersion in the period and personalities, with that touch of depth that transforms a good series to a great one." --Laurie R. King


In a London slowly recovering from World War II, two very different women join forces to launch a business venture in the heart of Mayfair--The Right Sort Marriage Bureau. Miss Iris Sparks, quick-witted and impulsive, and Mrs. Gwendolyn Bainbridge, practical and widowed with a young son, are determined to achieve some independence and do some good in a rapidly changing world.

But the promising start to their marriage bureau is threatened when their newest client, Tillie La Salle, is found murdered and the man arrested for the crime is the prospective husband they matched her with. While the police are convinced they have their man, Miss Sparks and Mrs. Bainbridge are not. To clear his name--and to rescue their fledging operation's reputation--Sparks and Bainbridge decide to investigate on their own, using the skills and contacts they've each acquired through life and their individual adventures during the recent war.

Little do they know that this will put their very lives at risk.

This was a delightful beginning to a new historical cozy series!

Iris Sparks and Gwendolyn Bainbridge have bills to pay. Like most of us do. In post-war London, they decide to start a matchmaking service of sorts. Come in, tell them a little about you, what you’re looking for, your deal-breakers, and they’ll find you a wife. Or a husband. They’re not messing around, either. Their contract is iron-clad, and leaves no doubt as to their purpose – they’re going to find you a spouse.

Unfortunately, one of their early customers is found dead, and the police decide rather quickly that the murderer must have been the prospective husband arranged for her by The Right Sort. Their new business is in jeopardy from the very beginning, so they decide the only thing to do is find the culprit themselves.

I was so happy to meet Iris and Gwendolyn. Both of them have pasts that still inform their day-to-day lives – Iris was clearly some sort of spy in the war, Gwendolyn is a young widow who had a breakdown when her husband died in the war and is still dealing with the fallout from that. Her in-laws have taken legal custody of her son, and it remains to be seen if she’s going to be able to get it back from them.

The mystery itself was engaging, if a bit predictable. There were a few surprises along the way, but for the most part, it ended up where you probably think it will from the beginning.

This does suffer a bit from debut-author-itis, mainly showing up as some head-hopping that got frustrating to read. But I found myself caring less about that as the book went on. Unlike a lot of debut novels, the two main characters in the The Right Sort of Man were absolutely wonderful, fully realized, well-done, and a joy to read. From Iris’ constant refrain of “I can’t tell you that” to any question she’s asked about her time in the war, to Gwen’s heartbreaking quest to regain custody of her child, and control of her life, these two ladies were spectacular. I know that Allison Montclair is working on the next book in the series, and I can’t wait to pick it up.