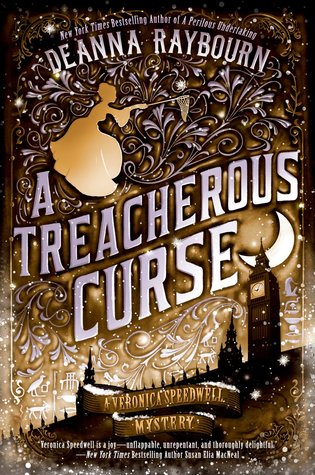 London, 1888. As colorful and unfettered as the butterflies she collects, Victorian adventuress Veronica Speedwell can’t resist the allure of an exotic mystery—particularly one involving her enigmatic colleague, Stoker.

His former expedition partner has vanished from an archaeological dig with a priceless diadem unearthed from the newly discovered tomb of an Egyptian princess. This disappearance is just the latest in a string of unfortunate events that have plagued the controversial expedition, and rumors abound that the curse of the vengeful princess has been unleashed as the shadowy figure of Anubis himself stalks the streets of London.

But the perils of an ancient curse are not the only challenges Veronica must face as sordid details and malevolent enemies emerge from Stoker’s past.

Caught in a tangle of conspiracies and threats—and thrust into the public eye by an enterprising new foe—Veronica must separate facts from fantasy to unravel a web of duplicity that threatens to cost Stoker everything. . . .

Veronica Speedwell is one of my favorite characters. She’s definitely my favorite cozy-series main character. Even after only 3 books (so far) in the series, I’m comfortable saying she’ll stay there. She’s just so refreshing. She speaks her mind, she doesn’t shy away from confrontation, and I don’t think she’s ever considered holding something back to not hurt someone’s feelings. She just says what she needs to say and expects everyone else to keep up with her.

Before the events in book one, I think it was a fairly lonely life for her. She had her aunts, but they weren’t close, she took her occasional trips abroad where she would find companionship for the duration, but other than that she was mostly alone. But during the course of the first book, she met Revelstoke Templeton-Vane and she has never looked back. (Side note – I’ve listened to all of these books on audio. Please let me know if I’m spelling that incorrectly)

Veronica and Stoker are clearly perfectly matched, even if he’s not quite at the point where he’s ready to take the step. But it doesn’t even matter, because the slow burn of their relationship is beautifully rendered. Stoker has some real damage in his past, and we’ve never quite gotten the full picture, but in A Treacherous Curse, we finally see what happened to him and what caused him to become the man he is today.

However, as in the first two books in the series, A Curious Beginning, and A Perilous Undertaking, the mystery is the main focus of the plot. In A Treacherous Curse, we have rare Egyptian artifacts, a despised ex-wife, a missing ex-best friend, false accusations of murder, attempted murder, and a possible curse.

I never want to give away too much of a mystery book in a review, so I’ll stop there and just say – go get this book. Actually, if you haven’t read the first two, start there. These could be read as stand-alones, but you’ll have a much deeper understanding of the relationships and the history of how all of these people came together. It really will make this book an even better read.