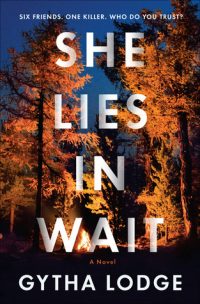 On a scorching July night in 1983, a group of teenagers goes camping in the forest. Bright and brilliant, they are destined for great things, and the youngest of the group—Aurora Jackson—is delighted to be allowed to tag along. The evening starts like any other—they drink, they dance, they fight, they kiss. Some of them slip off into the woods in pairs, others are left jealous and heartbroken. But by morning, Aurora has disappeared. Her friends claim that she was safe the last time they saw her, right before she went to sleep. An exhaustive investigation is launched, but no trace of the teenager is ever found.

Thirty years later, Aurora’s body is unearthed in a hideaway that only the six friends knew about, and Jonah Sheens is put in charge of solving the long-cold case. Back in 1983, as a young cop in their small town, he had known the teenagers—including Aurora—personally, even before taking part in the search. Now he’s determined to finally get to the truth of what happened that night. Sheens’s investigation brings the members of the camping party back to the forest, where they will be confronted once again with the events that left one of them dead, and all of them profoundly changed forever.

This is a tough one to review. There wasn’t anything wrong with this book. I guessed the murderer a little earlier than I would have liked, but I think that anyone who reads mysteries regularly would. I think that the biggest issue I had with the book is that there just wasn’t a lot of story to it. Not as much tension and angst as I like in my mysteries.

Six teenagers went camping in the 80s. One of them, the youngest of them at only 14, disappeared, and no one ever found any trace of her. Thirty years later, her remains are discovered very near the campsite. Near enough that it’s highly weird that she wasn’t found back then. DCI Jonah Sheens is in charge of the case, and I think this is where I was expecting a little more. DCI Sheens went to school with all of these teenagers. There was a lot of room to develop this relationship into something, but it just never went anywhere. When they were in school, Jonah and the others barely knew each other. It had no bearing on the case or the investigation, so it was a strange relationship to throw into the mix.

The case itself was pretty straightforward. Considering where Aurora’s body was found, it’s clear that at least one of the other 5 was lying about the night she disappeared, so it was hardly revelatory when that was discovered.

The book was well-written, and the follow up, which is coming out early in 2020 sounds interesting, so I’ll probably give this author another go. And I’m not not recommending this one, I just found it to be a little underwhelming, given the promising premise.

Gytha Lodge is the author of She Lies in Wait. She studied English at Cambridge University and received an MA in creative writing from the University of East Anglia.