The bride ‧ The plus one ‧ The best man ‧ The wedding planner ‧ The bridesmaid ‧ The body
On an island off the coast of Ireland, guests gather to celebrate two people joining their lives together as one. The groom: handsome and charming, a rising television star. The bride: smart and ambitious, a magazine publisher. It’s a wedding for a magazine, or for a celebrity: the designer dress, the remote location, the luxe party favors, the boutique whiskey. The cell phone service may be spotty and the waves may be rough, but every detail has been expertly planned and will be expertly executed.
But perfection is for plans, and people are all too human. As the champagne is popped and the festivities begin, resentments and petty jealousies begin to mingle with the reminiscences and well wishes. The groomsmen begin the drinking game from their school days. The bridesmaid not-so-accidentally ruins her dress. The bride’s oldest (male) friend gives an uncomfortably caring toast.
And then someone turns up dead. Who didn’t wish the happy couple well? And perhaps more important, why?

The Guest List follows the same formula as Lucy Foley’s previous book, The Hunting Party. We have one murder victim, unnamed until the very end, and chapter told from a rotating cast of POV characters, one of who is presumably the murderer.

It also had a similar locked-room mystery feeling, or, in this case, locked-island mystery. Everyone has gathered for a wedding, and we learn pretty early on that someone has died. Like in The Hunting Party, we don’t know who has died, and we don’t know how they’ve died.

The chapters are told in alternating points of view – the bride, the bridesmaid, the wedding planner, the best man – which ultimately was too many. It took me longer than I’d like for me to be able to readily identify who was who and what their relationship to the story was. We’re just sort of thrown into the story and just expected to figure out who’s who. I really think that would have been a lot easier to do in print where I could go back and double check the chapter headings to see who was who when I lost track. That’s harder to do in audio, so I can’t hold that against the book. And I don’t – the people and their relationships came together for me eventually.

I wanted the twists and turns to be a little more twisty and turny. There aren’t any “shocking twists” that so many mystery novels try to push on readers, but every mystery should have a few of them, and this one tried, but as someone who reads a lot of mysteries, I thought these were loudly telegraphed long before they actually happened. None of them was nearly as surprising as I think Lucy Foley wanted them to be, and I was disappointed with that.

As with The Hunting Party, though, the writing was good, and I recommend it, especially for readers who enjoy Ruth Ware or Riley Sager. I just don’t think anyone who’s been reading mysteries for any length of time will find anything new here. 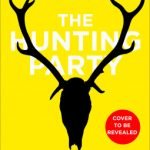 Waiting on Wednesday – The Hunting Party by Lucy Foley