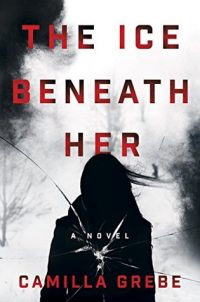 The Ice Beneath Her by Camilla Grebe
Series: Hanne Lagerlind-Schon #1
Series Rating:

Winter’s chill has descended on Stockholm as police arrive at the scene of a shocking murder. An unidentified woman lies beheaded in a posh suburban home—a brutal crime made all the more disturbing by its uncanny resemblance to an unsolved killing ten years earlier. But this time there’s a suspect: the charismatic and controversial chain-store CEO Jesper Orre, who owns the home but is nowhere to be found.

To homicide detectives Peter Lindgren and Manfred Olsson, nothing about the suave, high-profile businessman—including a playboy reputation and rumors of financial misdeeds—suggests he conceals the dark heart and twisted mind of a cold-blooded killer. In search of a motive, Lindgren and Olsson turn to the brilliant criminal profiler Hanne Lagerlind-Schön. Once a valued police asset, now marooned in unhappy retirement and a crumbling marriage, she’s eager to exercise her keen skills again—and offer the detectives a window into the secret soul of Jesper Orre.

But they’re not the only ones searching. Two months before, Emma Bohman, a young clerk at Orre’s company, chanced to meet the charming chief executive, and romance swiftly bloomed. Almost as quickly as the passionate affair ignited, it was over when Orre inexplicably disappeared. One staggering misfortune after another followed, leaving Emma certain that her runaway lover was to blame and transforming her confusion and heartbreak into anger.

Now, pursuing the same mysterious man for different reasons, Emma and the police are destined to cross paths in a chilling dance of obsession, vengeance, madness, and love gone hellishly wrong.

I’ve had some mixed results with a lot of the Scandinavian mysteries I’ve read this year, but The Ice Beneath her was definitely one of the better ones. I really enjoyed listening to this, trying to figure out how everything went together and who did what.

This book was told in 3 different perspectives: Emma Boham, a young woman in an improbable relationship with a powerful CEO, Peter Lindgren, our standard grizzled detective, and Hanne Lagerlind-Schön, a profiler. I loved this. Getting these different perspectives really helped to make this a fully-developed, rich story. Peter is investigating the murder of a decapitated, so far unidentified, young woman. Hanne is brought in to aid the investigation, mainly because the investigative powers that be have no idea that she’s dealing with early-onset dementia, and for most of the book, we don’t know exactly how Emma fits into the narrative at all. It’s intriguing and well-written, and I really enjoyed trying to figure it out.

And the atmosphere of this book really added to the overall experience of reading it. I swear I could feel the cold creeping in, even as I was sitting in my warm house with a mug of tea.

The Ice Beneath Her is as much a character study as it is a crime novel, and it hit me exactly right when I read it. If you, like me, haven’t had much luck with the Scandinavian thrillers, maybe pick this one up and give it a try.

Waiting on Wednesday – After She’s Gone by Camilla Grebe