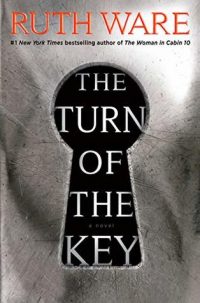 From the #1 New York Times bestselling author of In a Dark, Dark Wood, The Woman in Cabin 10, The Lying Game, and The Death of Mrs. Westaway comes Ruth Ware’s highly anticipated fifth novel.

When she stumbles across the ad, she’s looking for something else completely. But it seems like too good an opportunity to miss—a live-in nannying post, with a staggeringly generous salary. And when Rowan Caine arrives at Heatherbrae House, she is smitten—by the luxurious “smart” home fitted out with all modern conveniences, by the beautiful Scottish Highlands, and by this picture-perfect family.

What she doesn’t know is that she’s stepping into a nightmare—one that will end with a child dead and herself in prison awaiting trial for murder.

Writing to her lawyer from prison, she struggles to explain the unravelling events that led to her incarceration. It wasn’t just the constant surveillance from the cameras installed around the house, or the malfunctioning technology that woke the household with booming music, or turned the lights off at the worst possible time. It wasn’t just the girls, who turned out to be a far cry from the immaculately behaved model children she met at her interview. It wasn’t even the way she was left alone for weeks at a time, with no adults around apart from the enigmatic handyman, Jack Grant.

She knows she’s made mistakes. She admits that she lied to obtain the post, and that her behavior toward the children wasn’t always ideal. She’s not innocent, by any means. But, she maintains, she’s not guilty—at least not of murder. Which means someone else is.

Full of spellbinding menace and told in Ruth Ware’s signature suspenseful style, The Turn of the Key is an unputdownable thriller from the Agatha Christie of our time.

This is a tough one to review. As usual with Ruth Ware, the setting was creepy and atmospheric. Rowan Caine is a nanny, and she’s just taken a post with a family in a smart house. It’s clear that there’s more to this post than we’ve been told, and I started this book eager to figure it out.

The elements of the mystery that involved the house were as unsettling as I’d expected them to be, though there weren’t as many of them as I’d hoped. The house talking to Rowan, the lights  and drapes being completely controlled by her voice or by timers… I mean.. it’s 2019. Those things aren’t creepy anymore. What was creepy was the footsteps she was hearing over her head, even though she’s on the top floor, things she put in one place showing up in another place, or not showing back up at all, etc. Those things were creepy. The house, however, not so much.

We’re told this story via a letter than Rowan is writing to her solicitor from prison. We discover within the first few pages that one of the children she was nannying for has died, and she’s in prison for the murder. Rowan goes out of her way to never mention the name of the child to the solicitor, even though there’s no reason for such verbal gymnastics, since there has already been a trial, and the solicitor is aware of the child’s name. The only reason for this is because if the reader knew the name of the dead child, the solution to the mystery would be obvious. And it was.

This book ended up being an exercise in frustration more than anything else. I get annoyed when the narrator of a book goes obviously out of their way to not mention the name of the killer or victim or some other piece of information, for no reason other than that it would give away information that the author doesn’t want disseminated. No one talks like that, so it stands out and it’s ridiculous. I’m not going to say to my husband “The man of the couple we had over last weekend spilled red wine on our carpet.” I’m just going to say “John spilled the red wine.” It’s obvious and manipulative and I don’t like it.

It’s still 3 stars because I didn’t hate the book, I found the house interesting, and Ruth Ware is a really good writer. But I didn’t love it as much as I wanted to.

Waiting on Wednesday – One by One by Ruth Ware