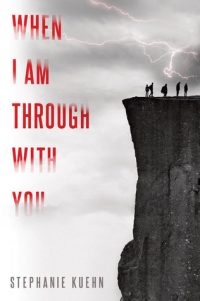 When I Am Through with You by Stephanie Kuehn
Format: Audiobook
Source: Library
Amazon
Apple Books
Goodreads

“This isn’t meant to be a confession. Not in any spiritual sense of the word. Yes, I’m in jail at the moment. I imagine I’ll be here for a long time, considering. But I’m not writing this down for absolution and I’m not seeking forgiveness, not even from myself. Because I’m not sorry for what I did to Rose. I’m just not. Not for any of it.”

Ben Gibson is many things, but he’s not sorry and he’s not a liar. He will tell you exactly how what started as a simple school camping trip in the mountains ended the way it did. About who lived and who died. About who killed and who had the best of intentions. And he’ll tell you about Rose. But he’s going to tell you in his own time. Because after what happened on that mountain, time is the one thing he has plenty of.

This was a rough listen. The premise was intriguing – a high school group goes hiking, and clearly they don’t all come back – but the actual execution of the premise was lacking. None of the actions of any of the kids made any sense, even allowing for the fact that they’re teenagers, and that most teenagers don’t make great decisions.

We know from the very beginning that a girl named Rose didn’t come back from this trip and that her boyfriend Ben is in jail for killing her. The book is meant to be a mystery – mainly what happened on the mountain and why did Ben kill Rose?

The actual answers to these questions were underwhelming to say the least. Frankly, by the time the answers started coming in, I didn’t care anymore. None of what was happening made any sense, not one single person in this book, not the teenagers or their teacher supervisors, did anything that was even a little bit logical.

And it’s also clear from the beginning that Ben is in jail for killing Rose, which makes sense, but by the end of this book, there are at least 6 or 7 murdered people, and no one else is in jail for any of them? Just Ben? It didn’t make a lot of sense.

This is the first book I’ve read by Stephanie Kuehn, and I based on this one, I don’t think I’d pick up any more.

Stephanie Kuehn is an author and a psychologist. Her debut young adult novel, CHARM & STRANGE, was the winner of the 2014 William C. Morris Award, and her second novel for teens, COMPLICIT, was named to YALSA’s 2015 Best Fiction for Young Adults list. Stephanie was also awarded the 2015 PEN/Phyllis Naylor Working Writer Fellowship for her forthcoming novel, THE SMALLER EVIL and her most recent book, DELICATE MONSTERS, won the 2016 Northern California Book Award. Stephanie lives in Northern California with her husband, their three children, and a joyful abundance of pets.