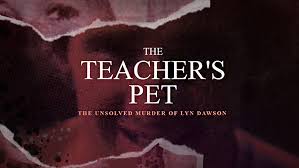 If an author turned in a manuscript based on the crime at the center of The Teacher’s Pet, their editor would send it back and just say “This would be too hard for readers to believe.” I had to pause this podcast on multiple occasions and look up details of the case online because I just didn’t believe half of what I was hearing.

As far as my (admittedly brief, surface-level) research revealed, though, what I was hearing was accurate. Lynette went missing, her husband, Chris, didn’t bother to report it for more than 6 weeks, and when he did finally go to the police and say “My wife hasn’t been seen or heard from in 6 weeks, but I’m pretty sure she just ran off.”, the police responded with “Sure. Seems right. We’ll do nothing.” and did literally nothing. No one looked for Lynn. No one spoke to her friends, colleagues, or family members. No one did anything. For almost 40 years.

And the revelations regarding the situation at the school where Chris and his twin brother, Paul, worked were equally stunning. I just… the hits just kept coming. The indifference, not only to Lynn’s disappearance, but also to the treatment of the high school girls Chris and Paul were teaching were infuriating and depressing.

I don’t want to give away too much, because I think going into this podcast mostly blind is the way to go. The middle dragged a bit for me, though. The information got repetitive and I thought it would have been better as a tighter 10-episode podcast, rather than the original 14. Because of the work Australian journalist Hedley Thomas has done on this case, there’s been a lot of movement, and even a recent arrest, so there have been 2 additional episodes dropped since the initial run ended. I’m happy to hear updates and see where the case goes, and if you’re interested in true crime at all, do yourself a favor and give this podcast a listen.