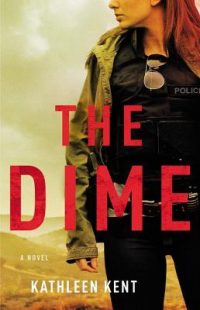 Brooklyn's toughest female detective takes on Dallas-and neither is ready for the fight.

Dallas, Texas is not for the faint of heart. Good thing for Betty Rhyzyk she's from a family of take-no-prisoners Brooklyn police detectives. But her Big Apple wisdom will only get her so far when she relocates to The Big D, where Mexican drug cartels and cult leaders, deadbeat skells and society wives all battle for sunbaked turf.

Betty is as tough as the best of them, but she's deeply shaken when her first investigation goes sideways. Battling a group of unruly subordinates, a persistent stalker, a formidable criminal organization, and an unsupportive girlfriend, the unbreakable Detective Betty Rhyzyk may be reaching her limit.

This is one of those books that I loved but I can’t review fully because I don’t want to give anything away. So this will be extremely general.

In The Dime, we meet a New York cop named Betty Rhyzyk. She and her girlfriend relocate to Dallas early in the book, and Betty is now in the narcotics division. The first case she’s put in charge of goes completely sideways and it seems like she just can’t get ahead of the members of the Mexican cartel she’s been trying to track down.

It becomes apparent that Betty has a stalker, one who’s somehow tied into the investigation, though Betty can’t quite figure out the connection. She’s determined to figure this out and restore her reputation, and I think that drive played into Betty making some iffy decisions throughout the rest of the story.

In the final third of this book, we get the answers to all of the questions that have come before, and trust me, they are bonkers. The villain comes extremely close to crossing the line into parody, and I think she did, in fact, cross that line once or twice, but for the most part, I enjoyed the reveal and the subsequent drama. Unfortunately, in 2018, it made more sense than it probably did when Kathleen Kent was writing it.

I really don’t want to give away too much of this, but trust me, you want to read or listen to this. The narrator, Cynthia Farrell, did a good job. She was able to differentiate between the various characters without “doing voices”, which is one of my biggest pet peeves. Some of the native Texas cops sounded a little too much like a caricature of what a New Yorker would think a Texan sounded like, but that may have been intentional. I loved Betty, I loved her girlfriend Jackie, and I can’t wait to see what Kathleen Kent has in store for them.

Waiting on Wednesday – The Burn by Kathleen Kent