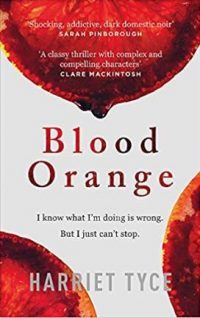 An electrifying debut thriller for fans of Anatomy of a Scandal, Apple Tree Yard, and Gone Girl.

Alison has it all. A doting husband, adorable daughter, and a career on the rise - she's just been given her first murder case to defend. But all is never as it seems...

Just one more night. Then I'll end it.

Alison drinks too much. She's neglecting her family. And she's having an affair with a colleague whose taste for pushing boundaries may be more than she can handle.

I did it. I killed him. I should be locked up.

Alison's client doesn't deny that she stabbed her husband - she wants to plead guilty. And yet something about her story is deeply amiss. Saving this woman may be the first step to Alison saving herself.

I'm watching you. I know what you're doing.

But someone knows Alison's secrets. Someone who wants to make her pay for what she's done, and who won't stop until she's lost everything....

A disturbing, toxic and compelling novel that explores the power of fear and desire, jealousy and betrayal, love and hate, BLOOD ORANGE introduces a stunning new voice in psychological suspense.

Guys. I need a good mystery! I had high hopes for this one, but like so many recently, it fell short.

Alison is a barrister in London. She’s allegedly smart, resourceful, and good at her job, but, frankly, I see no evidence of that in this book. The blurb claims she has “…a doting husband, adorable daughter, and career on the rise….”, but as far as I can tell none of those things are true. Her husband isn’t doting. He’s gaslighting her, constantly putting her down, telling her she forgot to do something he was supposed to do, drugging her and then telling her that she got drunk and embarrassed them both. The fact that she would have 1 glass of wine, then he would make her tea or bring her water, then she’d wake up in the morning after blacking out and listen to his “disappointed” stories of her antics, was eye-rollingly ridiculous. Once is “I mean… I guess I drank more than I thought.” Over and over and over is an issue of a different sort.

And to be clear – Alison drinks too much. She’s often drunk. Which makes it even more insane that she just accepts that when she’s at home, and only when she’s at home or out with her husband, she blacks out after 1 drink. Nightly she goes out with co-workers and drinks bottles of alcohol, and has no problem remembering the night, but at home, she can’t have a single glass without blacking out? And never thinks anything of this? It’s difficult to suspend disbelief for this.

And a career on the rise? She’s having an affair with her boss, who actually treats her even worse than her husband does, that she’s constantly calling off and then putting back on. It’s interfering with her work, interfering with her marriage, and she’s such a mess she doesn’t see any of it.

The mystery of her case is pretty clear from the minute it starts. Anyone who reads mysteries will figure it out instantly. It’s not hidden, it’s not mysterious, it’s not intriguing.

Then the ending, and the solving of all of Alison’s problems comes out of nowhere. It’s so out of nowhere that I had to reread it a couple of times to be sure I wasn’t missing something and that I was reading it correctly. It’s just so out there and there are no hints of it anywhere.

This is Harriet Tyce’s debut, and while she’s technically a good writer, the story itself was so convoluted and, frankly, boring, that I don’t know if I’d read her next one.

Harriet grew up in Edinburgh and studied English at Oxford University before practising as a criminal barrister for the next decade. After having children she left the Bar and has recently completed with distinction an MA in Creative Writing – Crime Fiction at the University of East Anglia. Blood Orange is her first novel.