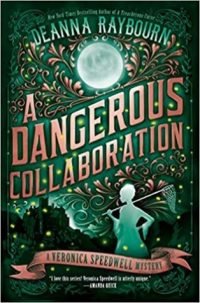 Victorian adventuress Veronica Speedwell is whisked off to a remote island off the tip of Cornwall when her natural historian colleague Stoker's brother calls in a favor. On the pretext of wanting a companion to accompany him to Lord Malcolm Romilly's house party, Tiberius persuades Veronica to pose as his fiancée—much to Stoker's chagrin. But upon arriving, it becomes clear that the party is not as innocent as it had seemed. Every invited guest has a connection to Romilly's wife, Rosamund, who disappeared on her wedding day three years ago, and a dramatic dinner proves she is very much on her husband's mind.

As spectral figures, ghostly music, and mysterious threats begin to plague the partygoers, Veronica enlists Stoker's help to discover the host's true motivations. And as they investigate, it becomes clear that there are numerous mysteries surrounding the Romilly estate, and every person present has a motive to kill Rosamund...

A locked-room mystery is probably my favorite type of mystery. This one doesn’t start out that way, but once Veronica and Stoker get to the island, invited there by Stoker’s brother, ostensibly to check out a rare butterfly, it kicks in, and it is as good as any of the others in this fantastic series.

Stoker wasn’t technically invited to the island by his brother, but he follows Veronica there, and once everyone arrives, it turns out they’ve all been invited by their host in order to help him solve the disappearance of his wife on their wedding day 3 years ago. This was so much fun. Veronica and Stoker will never be able to resist the lure of a good mystery, so even though they were initially reluctant, they dive right in to figuring it out. Neither of them was there for the wedding, so they’re starting from scratch, gathering information, getting everyone’s stories. It’s been assumed by the residents of the island that Malcolm Romilly killed his wife, but no one has been able to prove it.

The mystery itself was fine. It was a solid mystery, and fun to read. The draw of this series, though, is not the mysteries themselves, it’s the relationship between Veronica and Stoker. Finally. Finally. Finally. There’s some movement in their relationship. We’ve been waiting for them to get together for 3 books before this one, so I really needed to see something happen at this point.

As usual, I’m going to have to try very hard not to annoyingly stalk Deanna Raybourn for the next installment of this series. I love it, and any time someone is looking for a new cozy series to get into, it’s the first one I recommend. But do read them in order. The slow burn of Veronica and Stoker’s relationship develops over time, and you’re going to want to settle in for it.