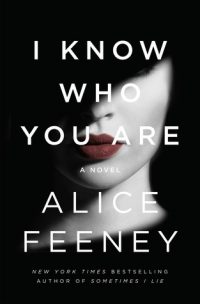 I Know Who You Are by Alice Feeney
Format: Hardcover
Source: Library
Amazon
Apple Books
Goodreads

l Know Who You Are is the brilliant tale of two stories. One is about Aimee Sinclair—well-known actress on the verge of being full-on famous. If you saw her, you’d think you knew her. One day towards the near-end of her shoot on her latest film, Aimee comes home from filming to find her husband’s cell phone and wallet on the dining room table. He never goes anywhere without them. But he’s nowhere to be found. She’s not too concerned—they had a huge fight the night before. They both said things they didn’t mean. He might have done things he didn’t mean, things she can’t forget. Even though she has a history of supposedly forgetting. After all, she’s a very good actress.

The next morning she goes for her morning run and then goes to her favorite coffee shop. But her card is denied. When she calls the bank they say her account has been emptied of $10,000. She immediately suspects her husband. But they say no, it was Aimee herself who closed out the account. And thus begins a bizarre rabbit hole into which Aimee finds herself falling where nothing is at it seems.

Alternating with Aimee’s story is that of a little girl who wandered away from home. We always tell our kids not to talk to strangers or bad things will happen. Well, bad things happen.

In I Know Who You Are, Alice Feeney proves that she is a master at brilliantly complicated plots and twists after twists.

I’m going to be honest. (Not that I’m not normally honest).

I’m being generous with 2 stars. Those stars are based on the fact that Alice Feeney is a good writer, and goodwill left over from Sometimes I Lie. Because, frankly, this book is a hot mess. There may be some minor spoilers ahead.

Aimee Sinclair is an actress. She’s right on the verge of being famous – you probably recognize her if you saw her, but you’d need to look her up on IMDB to figure out exactly where from. She comes home from filming one day and realizes that her husband is gone. He’s just… gone. Phone, keys, wallet, they’re all on the coffee table, but he’s gone.

That set up is my catnip. A person who’s just randomly gone missing and there are no clues to where they’ve gone – I love it.

Alas. This was literally the opposite of everything I love about that setup. This was so bad. The police detective, Detective Sargent Wakely, just walks around knowingly smirking at everything while not actually doing any detective work. She decides immediately that Aimee has killed her husband, while not actually having any evidence that he’s dead or that Aimee could have or would have done anything. Her decision is instant and immovable and she never bothers to look at anything that might contradict it. There’s eventually a body found, so she arrests Aimee for murdering her husband even though it would have been very clear instantly that the body couldn’t have been that of her husband. It doesn’t make any sense.

And that ending. Hooboy, that ending. The actual answers come out of nowhere and they are stunningly bad. The entire solution to the mystery was such a convoluted mess that I had to read it twice to be sure I wasn’t in some fever dream. The timeline doesn’t make sense, there are loose threads left dangling, and overall this book was a huge disappointment. I’m only glad it was as short as it was so that I didn’t have to spend more time on it than I did. My recommendation – skip this one.

Waiting on Wednesday – I Know Who You Are by Alice Feeney 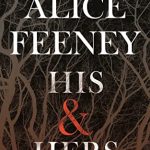 Audiobook ARC Review – His & Hers by Alice Feeney