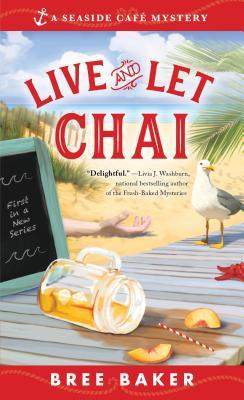 Trouble is brewing in Everly's new café. Can she bag the culprit?

Life hasn't been so sweet for Everly Swan over the past couple of years, but now that she is back in her seaside hometown and the proud owner of a little iced tea shop and caf' right on the beach, things are finally starting to look up--until a curmudgeonly customer turns up dead on the boardwalk. With one of her hallmark glass tea jars lying right next to him and an autopsy that reports poison in his system, it doesn't look good for Everly or her brand new business.

As the townspeople of Charm, formerly so welcoming and homey, turn their back on Everly, she fights to dig up clues about who could have had it in for the former town councilman. With a maddeningly handsome detective discouraging her from uncovering leads and a series of anonymous attacks on Everly and her business, it will take everything she's got to keep this mystery from boiling over.

Live and Let Chai is Bree Baker’s debut novel, but it suffered none of the obvious problems so often seen in debut novels.

Everly Swan has recently moved back home to Charm, North Carolina after being gone for several years. She’s opened her dream shop, a sweet tea shop and café right on the beach, and for once, things couldn’t be going better for her. Until a dead body shows up on the beach with an empty jar of her tea next to it. Now she has to figure out who actually killed him before her  tea shop goes out of business.

This book was really fun. I enjoy cozy mysteries, but one of the biggest problems I have with them is the ease with which the local police department shares their information with our amateur sleuth. “Hi, Mr. Police Man, can you tell me the victim’s time of death, and the alibis of all your top suspects?” “Well, of course I can, Ms. Cookie Baker who was recently on that suspect list. I see no reason not to tell you everything about my investigation.” There was none of that here. Detective Grady Hays seemed to remember that he was the cop and Everly is a sweet tea maker who seems to keep sticking her nose where she shouldn’t and getting seriously injured for it. He wouldn’t involve her in the investigation and, in fact, repeatedly tried to get her to stop her side investigation, rightly pointing out that it could negatively impact his own investigation.

To be clear, I don’t need or want the amateur to actually stop investigating, because that’s the entire point of the cozy. But I do get frustrated when the police, coroner, medical examiner, paramedics, etc, are constantly keeping her up-to-date on the investigation. It’s a weird line for me to have, but there it is.

Charm, North Carolina lived up to its name. It’s a sweet little town, and the cast of supporting characters was fun. I was a little confused about Everly’s family history. Apparently, all the Swan women are cursed to never have their love work out. Or something. Divorces, husbands dying early, broken engagements, etc., And the women also aren’t supposed to leave the town of Charm? It was unclear what the rules of this were, and I didn’t really understand it. Family curses are a really strange plot point to put into an otherwise completely unparanormal, unmystical, unmagical book. I can’t tell if that’s something that’s going to be a big deal later, or if it’s just a quirky small-town story that’s been passed around about Everly and her family.

Besides that, though, I really liked Everly. She’s smart, and determined, and resourceful. When Detective Hays thoughtlessly announces in front of everyone in town that Everly’s tea poisoned their victim, people immediately stopped coming to her shop, and her business was in trouble. Beyond just figuring out who the actual killer was, she sat down and spent time working up a plan to bring people back to her shop. She came up with a strategy and steps to take to make it happen, then she did make it happen. Her plan to get her business back on track went well beyond “Step 1. Find Killer. Step 2. Profit!” It wasn’t easy, but she figured it out, and she would have made it work, even if she didn’t find the murderer as quickly as she wanted.

The mystery itself was almost inconsequential to me. I was having so much fun getting to know Everly, her aunts, and the town of Charm itself. But the mystery is the point of the book, and the mystery that Bree Baker set up was clever. I was pretty sure I knew who the killer was more than once. I was eventually right about it, but I had a good time getting there. The ending of the book opens up a new storyline that I’m excited to get into, so I’m looking forward to the next book in the series, No Good Tea Goes Unpunished, which will be out next week. You can preorder your copy at that link!

Bree Baker is a Midwestern writer, obsessed with small town high jinks, sweet tea and the sea. She’s been telling stories to her family, friends and strangers for as long as she can remember, and more often than not, those stories feature a warm ocean breeze and recipe she’s sure to ruin. Now, she’s working on those fancy cooking skills and dreaming up adventures for the Seaside Cafe mysteries. Her debut title, Live & Let Chai releases from Sourcebooks in July 2018. Bree is a member of Sisters in Crime, International Thriller Writers and the Romance Writers of America. She is represented by Jill Marsal of Marsal Lyon Literary Agency. 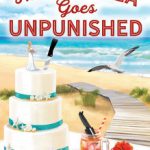