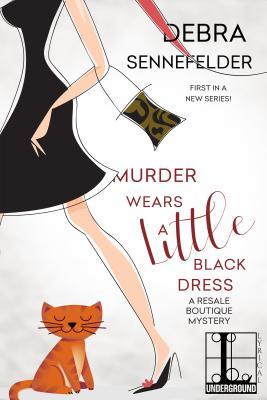 Every woman would kill for one . . . Manhattan fashionista Kelly Quinn thought she'd left her upstate New York town far behind . . . until the Seventh Avenue expat returns home to revamp her grandmother's consignment shop into an upscale boutique-and unwittingly sets a trend for murder . . . After her rising career as a Manhattan buyer is derailed, Kelly has mixed feelings about relocating back to Lucky Cove, in spite of her big plans for the soon-to-be-renamed Curated by Kelly Resale Boutique. What's left of her luck starts running out when a customer puts on a black lace dress that triggers visions of someone being murdered. As if the haunted "Murder Dress" isn't enough to kill business, the psychic's doppelganger cousin has just been found bludgeoned to death. Was Maxine LeMoyne the real target or was it a case of mistaken murder? With some creepy pre-Halloween bargain hunters walking the night and Kelly suddenly a person of interest, a second murder rocks the close-knit town. Now Kelly could be the one who ends up talking to dead people when she's stalked by a killer determined to take her out in high style . . .

I was initially introduced to this book by my friend Tiffany’s review over at Read All the Crime. It sounded fun and I was in the mood for a new cozy series, so it seemed like a perfect fit.

I liked this one a lot, but I didn’t love it. My biggest disconnect with it was that the entire premise of the book was based on a psychic vision, and I didn’t think the author leaned into that heavily enough. When Maxine, a psychic, tries on a dress in Kelly’s new boutique, she has a vision of a man being murdered by a woman wearing the dress. Because this is a very small town, that’s all it takes for the business at Kelly’s newly-inherited store to drop off dramatically, endangering her livelihood. But… that’s sort of the end of the psychic part of the story. Once Maxine has that vision, Kelly decides she needs to try to solve the mystery in order to save her business, but there’s no more paranormal, magical, or mystical part of this book. I really wish Debra Sennefelder would have gone further with that.

But even with that, I really liked this. Kelly Quinn lost her job as an assistant fashion buyer in Manhattan, so she moves home to take on the running of her grandmothers resale shop (boutique!) after her grandmother dies. Debra Sennedfelder did a great job with this. Kelly is struggling to remake the shop and turn a profit. Her grandmother’s store was a fixture in their small town, and no one wants her to make the changes she’s determined to make.

But that isn’t going to stop Kelly. She knows that her ideas are good, and that she can make the boutique a success, but she’s going to have to fight everyone every step of the way, including Pepper, her grandmother’s best friend, still working at the boutique, and hates to see Kelly come in and change everything. This is where Kelly really shone. She listened to what Pepper had to say, but she didn’t let herself be swayed from her plans. She knew what she was doing, and she stuck to it, while still being kind to Pepper. She had her moments of self-doubt, like we all do, but she got through them.

The supporting characters won’t be a surprise to anyone who reads cozies. There’s the cop who may or may not become a love interest, the best friend who has a crush on that cop and constantly supplies the baked goods that everyone eats all day every day without worrying about their health or gaining any weight. There’s the cop’s partner, a woman who is sure from the very first minute that Kelly is involved with the murders even though there’s absolutely no evidence to support that, and won’t be swayed from her opinion no matter what. And there’s Kelly’s uncle, a shady lawyer who is the executor of the estate, and desperately wants Kelly to sell the shop. I wasn’t sure exactly how this would benefit him, because I know pretty much nothing about inheritance law, or property law, or any of the other legal issues at stake here, but it was clear that somehow, Kelly selling the shop would somehow make him money, which is all that he cares about.

The weakest side character was the uncle’s new wife. There’s nothing wrong with her, she’s just stock character, a mean girl who’s become a mean woman who makes snarky comments and tries to make Kelly feel bad about herself and her shop. She’s uninteresting and didn’t add anything to the story.

The mystery was engaging, even if it did get convoluted from time to time. There were a lot of moving parts to it, and some of the side pieces didn’t seem to quite fit. But overall, this was an engaging start to a new cozy series.

Debra Sennefelder is an avid reader who reads across a range of genres, but mystery fiction is her obsession. Her interest in people and relationships is channeled into her novels against a backdrop of crime and mystery. Her first novel, THE UNINVITED CORPSE (A Food Blogger mystery) was published in 2018.