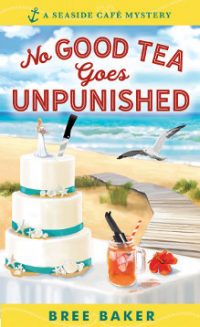 Catering her childhood friend’s beachfront wedding was a dream come true for Everly Swan—and, with hundreds of guests in attendance, great exposure for her new iced tea shop and café. But when the well-to-do groom is found floating facedown in the surf, the locals of Charm, North Carolina turn their suspicions on his new bride. Could she have been so desperate to lay hands on his fortune that she arranged for his murder even before they set off on their honeymoon?

Everly knows her lovestruck friend couldn’t be behind the murder, but with clues pointing in several directions, she can’t decide which wedding guest is the most likely culprit. Meanwhile, the frustratingly handsome Detective Hays has made it clear that Everly should stay out of the investigation altogether. But with a killer on the loose and a feeling that someone is watching her café very closely, Everly knows that if she can’t solve this murder soon, her cake might be iced for good.

I really liked the first book in this series, Live and Let Chai, and this second entry in the series is equally charming. (Not a pun)

Everly Swan is settling back into Charm, North Carolina nicely. Her iced tea shop, Sun, Sand, and Tea is doing well, though she still needs to be concerned with doing enough business to pay the mortgage and make enough money to do some renovations at the cafe. One way of doing this she looked into in the previous book was doing a little catering.

Which is where we are when No Good Tea Goes Unpunished opens. Everly is catering the wedding of a childhood friend, Judy, to a man named Craig Miller. Unfortunately, the event is cut short, and Everly is thrown back into investigating a murder when the groom is found dead during the reception.

Everly promises Sheriff Grady Hayes that she’ll stay out of it this time, but someone seems determined to keep her involved. Her home is broken into, her golf cart is vandalized, and a few other things happen that continue to pull her into the case, no matter how determined she is to stay out.

To be fair, she’s only mildly determined to stay out. She thinks that if she can talk to everyone in town, both the residents of Charm and the wedding guests who are stuck there until being cleared by the police, she’ll be able to figure out who murdered Craig. It’s a little far-fetched of a plan. Unlike the central murder mystery of the first book, Craig was an outsider. He and his family don’t live in Charm, so Everly’s idea to just randomly start talking to each of them about Craig’s death doesn’t make a lot of sense. If they’re not willing to talk to the police, they’re certainly not going to spill their murdery secrets to a random stranger.

There’s a reporter who sort of shows up out of nowhere and won’t leave, an ex-boyfriend who pops back up, determined to win Everly back, and, of course, Sheriff Hayes, who is clearly interested in Everly, and Everly in him, but for whatever reason just isn’t willing to move forward yet.

Overall, this is a fun addition to the series, though Everly sometimes strikes me as a little more naive than a late-twenties business owner should be. At one point, she references wearing a shirt with her tea shop’s logo on it, which was an idea she got from a book on marketing and sales she’d just finished reading. I mean – Everly needs a book on marketing to tell her to wear a t-shirt with her logo on it? Really? It’s a little disappointing, because in Live and Let Chai, I thought Everly was resourceful and smart about her business. This is a departure from that, and I liked this aspect of her better in the first book.

Another example is the reporter asking where the bar is at the memorial service and Everly being shocked, SHOCKED, that he would as such a thing. Deciding not to have a bar or any alcohol at a memorial service (or the wedding, for that matter) is fine, but you can’t really be shocked to be asked about it. It’s a pretty common practice, though certainly not universal. It stood out as strange, because Everly is certainly no teetotaler. We see her with boozy grapes and wine once or twice through the books, so such a strong reaction regarding the alcohol at the events seems out of place.

But this is a good story, and a fun mystery. There are a few threads left dangling, and I don’t know yet if they were just dropped, or if they’ll be followed up on in a further book, but I’ll definitely be reading the next book in the series. Especially if it comes out soon – Bree Baker is a good writer, and I can almost smell the ocean and the sweet tea through her descriptions. I haven’t tried any of the recipes, because I am not much of a cook, but I wish I were, because the Pineapple Chicken Wraps sound pretty good.

Bree Baker is a Midwestern writer, obsessed with small town high jinks, sweet tea and the sea. She’s been telling stories to her family, friends and strangers for as long as she can remember, and more often than not, those stories feature a warm ocean breeze and recipe she’s sure to ruin. Now, she’s working on those fancy cooking skills and dreaming up adventures for the Seaside Cafe mysteries. Her debut title, Live & Let Chai releases from Sourcebooks in July 2018. Bree is a member of Sisters in Crime, International Thriller Writers and the Romance Writers of America. She is represented by Jill Marsal of Marsal Lyon Literary Agency. 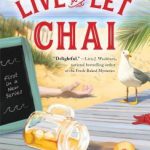