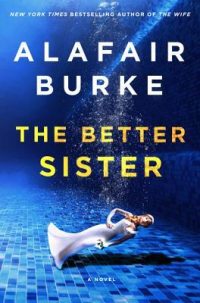 From Alafair Burke—New York Times bestselling author of the runaway hit, The Wife—comes another twisty tale of domestic noir. When a prominent Manhattan lawyer is murdered, two estranged sisters—one the dead man’s widow, the other his ex—must set aside mistrust and old resentments . . . but can they escape their past?

Though Chloe was the younger of the two Taylor sisters, she always seemed to be in charge. She was the honor roll student with big dreams and an even bigger work ethic. Nicky was always restless . . . and more than a little reckless—the opposite of her ambitious little sister. She floated from job to job and man to man, and stayed close to home in Cleveland.

For a while, it seemed like both sisters had found happiness. Chloe earned a scholarship to an Ivy League school and moved to New York City, where she landed a coveted publishing job. Nicky married promising young attorney Adam Macintosh, and gave birth to a baby boy they named Ethan. The Taylor sisters became virtual strangers.

Now, more than fifteen years later, their lives are drastically different—and Chloe is married to Adam. When he’s murdered by an intruder at the couple’s East Hampton beach house, Chloe reluctantly allows her teenaged stepson’s biological mother—her estranged sister, Nicky—back into her life. But when the police begin to treat Ethan as a suspect in his father’s death, the two sisters are forced to unite . . . and to confront the truth behind family secrets they have tried to bury in the past

The Better Sister by Alafair Burke is a good mystery, but it’s not a great one. I don’t think that Chloe being married to her sister’s ex-husband was as big an issue as Alafair Burke wanted it to be. While it’s not a common situation, and I’m sure it’s awkward at Christmas, it’s hardly unheard of, especially since Nicky is presented as a drug addict who keeps relapsing and can’t get her life together.

I’ve enjoyed Alafair Burke’s books in the past, this one just didn’t land for me. It started off pretty strong, and I was invested in figuring out who killed Adam, but once we got to the middle of the book, the story started to wander and become harder to follow. Burke seemed to more interested in trying to throw in surprise after surprise to the reader and less interested in a cohesive story. Her skills as a lawyer are on full display in the courtroom scenes, but the characters aren’t a well-drawn as I usually see from her. Frankly, I ended up bored through a lot of this, and if I’d been reading instead of listening, I might have been tempted to skim through a lot of it.

Alafair Burke is a good writer, and that always comes through, but this is one of the weaker ones I’ve read from her. No one really acts in their own best interests, they’re busy trying to keep secrets from each other, and doing their best to blame everyone else for all of their own problems. The cops are pretty laser-focused on Ethan being the killer from the very beginning, even though there isn’t any real proof. They just go for it, and even when they’re presented with actual evidence, they ignore it because they already have Ethan in their sights. I know this happens in real life, there are hundreds of true crime podcasts that tell us that, but that doesn’t make it less frustrating to watch it play out in fiction.

Overall, this was fine. Like I said in the beginning, it was good but not great. It could have significantly shorter, and contained a few more surprises for surprise’s sake, but I’ll always read what Alafair Burke’s books, and I know a lot of people loved it, so give it a try – you might completely disagree with me.

Her most recent psychological thriller, THE WIFE, has been praised as “sneaky” (Lisa Scottoline), “schemey” (Seattle Times), “twisty” (Megan Miranda), and “tantalizing” (Booklist). THE WIFE was selected as a best-of-the-month pick by Amazon, Barnes & Noble, Entertainment Weekly, O (Oprah Magazine), and others. It is being adapted as a feature film by Amazon Studios, with Alafair hired to write the screenplay.

Waiting on Wednesday – The Better Sister by Alafair Burke