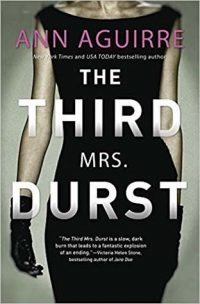 Marlena Altizer Durst lives in her husband's shadow. He controls her every move--what she wears, the food she eats, and the friends she's allowed to make. If she disobeys, there are...consequences. And he has all the power.

To outsiders, it seems that she leads a fairy-tale life. But nobody ever wonders if Cinderella was happy after she married the prince. Marlena has traded freedom and safety for luxurious imprisonment, and most days, that seems like a bad bargain. Death may be the only exit she's allowed. Just like his first wife. And his second. Unless she flips the script.

"The Third Mrs. Durst is a slow, dark burn that leads to a fantastic explosion of an ending."--Victoria Helen Stone, bestselling author of Jane Doe

This book was pretty much…. fine, I guess. We first meet Marlena as a driven 16-year-old, determined to pull herself out of the gutter where she and her family live and make a name for herself. Modeling, apparently. She manages to position herself exactly right to meet the exact people she wants to meet and to make them do exactly what she wants them to do. Which, on the one hand is a little hard to believe of a naive 16-year-old, but on the other hand, it seems like most of the people she’s trying to put herself in front of are predatory men, and they’re generally blind to anything other than the basest opinions of naive 16-year-old girls and are likely easy to be maneuvered into doing whatever she wanted.

And what Marlena wants, we eventually come to realize, is Michael Durst, though we don’t know why. Mainly because even though we’re inside Marlena’s head for this entire book, she never once thinks about what she wants from Michael Durst until the very end of the book, which is one problem I had with it. That kind of writing is just blatantly manipulative, and it’s always so obvious that’s what’s happening.

What follows is a pretty twisted cat-and-mouse game. Marlena and Michael are married, and he’s vile. Which apparently she knew, although in the beginning, she seems to be surprised by it. Which, again – we’re in her head. If she knew this going in, why wouldn’t it have been clear?

The rest of the book was just… fine. Marlena needs to get away from Michael, but she’s determined to destroy him in the process. The lengths she goes to are hard to imagine, much less believe, and along the way she meets the pretty standard cast of characters for these books – social workers, psychiatrists, doctors, cops, lawyers, all of whom think she’s crazy and Michael can’t possibly be violent. It’s as frustrating here as it is in other books.

Michael is eventually charged with murder, attempted murder, racketeering, money laundering, tax evasion, kidnapping, and I don’t even know what else, but gets out on bail? Sure. The epilogue finally clued us into what was actually happening in the last third of the book, and it was as unbelievable as the rest of it. It really doesn’t hold up once you start thinking it through, but I’d advise not doing that anyway.

There’s no real character development here; this book is 100% plot-focused. The best I can say about it is that it was a quick read, one that I was able to read in one sitting, and it really wasn’t terrible. Just…. ok. There was nothing new here, and nothing that was even surprising, let alone shocking.