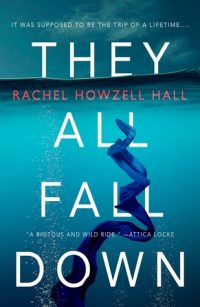 It was supposed to be the trip of a lifetime.

Delighted by a surprise invitation, Miriam Macy sails off to a luxurious private island off the coast of Mexico, with six strangers—an ex-cop, a chef, a financial advisor, a nurse, a lawyer, a young widow.

Surrounded by miles of open water in the gloriously green Sea of Cortez, Miriam is shocked to discover that she and the rest of her companions have been brought to the remote island under false pretenses—and all seven strangers harbor a secret.

Danger lurks in the lush forest and in the halls and bedrooms of the lonely mansion. Sporadic cell-phone coverage and miles of ocean keeps the group trapped in paradise. And strange accidents keep them suspicious of each other, as one by one . . .

They all fall down

I really wanted to love this book. I really, really did. And Then There Were None is easily my favorite Agatha Christie book, and possibly my favorite mystery of all time. And there have been plenty of attempts to recreate it, most of which I thought failed miserably. The description of this one really gave me those Christie vibes, so I was really excited.

Unfortunately, this one, too, fell flat for me. One of the things that made And Then There Were None so intriguing was that while several of the characters were awful people, not all of them were. They had all been carefully selected by their anonymous host to be gathered together to pay for their sins. Some of them had legitimately committed crimes and hurt other people, and had absolutely no remorse. Others not so much. Some of them had caused accidents, some of them had acted in a moment of passion, and several of them suffered genuine remorse and guilt for what had happened. Whether you think that’s enough of a punishment or not, they were at least layered, complex characters.

In They All Fall Down, that’s not the case. This group of seven strangers was brought together and abandoned on the island, and when their crimes become clear, it also becomes clear that all of them had deliberately committed their crimes, purposely setting out to hurt others, and had no remorse. Every one of them was a one-note, mustache-twirling villain, and I felt nothing when the started dropping.

Our main character, Miriam, ends up on the island after receiving an invitation to join a reality show. Randomly. She just… randomly receives an email inviting her to fly to Mexico, all-expenses-paid, to film a completely unique, never-done-before pilot for a reality show. In 2019. And she doesn’t immediately send the email to spam, she replies and ends up flying to Mexico. Who would do that? Sure – if you’re already a celebrity, I’m sure you get these emails all the time. But Miriam isn’t a celebrity, she’s a nightmare dance mom who’s clearly involved in some sort of ongoing altercation with teenagers. It makes no sense that she’d get that invitation and even less that she’d go along with it.

The other characters were the same. The ruses that had gotten them there seemed to make a little more sense, but none of them were fleshed out or developed, and I could barely tell them apart. And once they started dying, it didn’t seem to matter.

I’ll still keep an eye out for a good update to And Then There Were None. I think there’s a way to do it, but this just wasn’t it.

Rachel was born in Los Angeles, California fifteen days after Paul McCartney announced the split of the Beatles. As a child, she kept a pen in her hand, writing everywhere—in notebooks, on loose-leaf paper, in her big brother’s prep-school yearbook and on the back of church bulletins. But never on walls, buildings or freeway overpasses. That is graffiti.

For four years, she lived in the forest at UC Santa Cruz. There, she received a degree in English and American Literature, and helped to charter the Pi Upsilon Chapter of Alpha Kappa Alpha Incorporated.

She left Santa Cruz in 1992 and returned to Los Angeles. Since then, she has worked a variety of jobs, including for incredible organizations like PEN Center USA West, American Civil Liberties Union of Southern California, City of Hope and Pancreatic Cancer Action Network.

Rachel lives with her husband and daughter in Los Angeles, the land of exceptional drought – despite the recent El Nino effect.