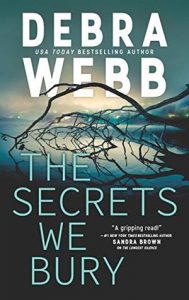 Title: The Secrets We Bury

Doctor Rowan Dupont knows death. She grew up surrounded by it in her family’s Victorian funeral home, and it’s haunted her since the day her twin sister drowned years ago. Between her mother’s subsequent suicide and the recent murder of her father, coming home to run the funeral home feels fitting—even if it leaves her vulnerable to an obsessive serial killer.

Rowan refuses to let fear keep her from honoring her family. But the more time she spends back in Winchester, Tennessee, the more she finds herself questioning what really happened that fateful summer. Had her sister’s death truly been an accident? And what pushed their mother to take her own life? The dark lake surrounding Rowan’s hometown holds as many secrets as the bodies that float in its chilling depths. But Rowan is running out of time if she’s going to uncover the truth before somebody sinks her for good.

I love a book full of twisty family secrets!

DEBRA WEBB is the USA Today bestselling author of more than 150 novels, including reader favorites the Faces of Evil, the Colby Agency and the Shades of Death series. She is the recipient of the prestigious Romantic Times Career Achievement Award for Romantic Suspense as well as numerous Reviewers Choice Awards. In 2012 Debra was honored as the first recipient of the esteemed L. A. Banks Warrior Woman Award for her courage, strength, and grace in the face of adversity. Recently Debra was awarded the distinguished Centennial Award for having achieved publication of her 100th novel. With this award Debra joined the ranks of a handful of authors like Nora Roberts and Carole Mortimer.

With more than four million books sold in numerous languages and countries, Debra’s love of storytelling goes back to her childhood when her mother bought her an old typewriter in a tag sale. Born in Alabama, Debra grew up on a farm and spent every available hour exploring the world around her and creating her stories. She wrote her first story at age nine and her first romance at thirteen. It wasn’t until she spent three years working for the Commanding General of the US Army in Berlin behind the Iron Curtain and a five-year stint in NASA’s Shuttle Program that she realized her true calling. A collision course between suspense and romance was set. Since then she has expanded her work into some of the darkest places the human psyche dares to go.