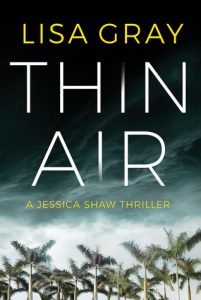 Private investigator Jessica Shaw is used to getting anonymous tips. But after receiving a photo of a three-year-old kidnapped from Los Angeles twenty-five years ago, Jessica is stunned to recognize the little girl as herself.

Eager for answers, Jessica heads to LA’s dark underbelly. When she learns that her biological mother was killed the night she was abducted, Jessica’s determined to solve a case the police have forgotten. Meanwhile, veteran LAPD detective Jason Pryce is in the midst of a gruesome investigation into a murdered college student moonlighting as a prostitute. A chance encounter leads to them crossing paths, but Jessica soon realizes that Pryce is hiding something about her father’s checkered history and her mother’s death.

To solve her mother’s murder and her own disappearance, Jessica must dig into the past and find the secrets buried there. But the air gets thinner as she crawls closer to the truth, and it’s getting harder and harder to breathe.

I love this concept – a PI finds out that she was kidnapped as an infant and sets out to solve her own mystery.

Lisa decided at a young age that she wanted to write features for magazines and somehow ended up working as a football journalist for 14 years instead. As the Press Association’s Chief Scottish Football Writer, she covered Rangers, Celtic and Scotland at home and abroad, and reported on UEFA Cup and Champions League finals.
Highlights included meeting David Beckham and Diego Maradona, impersonating Cameron Diaz (very badly) live on Spanish radio, and hanging out with Iron Maiden frontman Bruce Dickinson in Tel Aviv.
It wasn’t all glamour though and, after too many Scottish winters spent freezing at matches and worrying about dodgy wi-fi connections, Lisa gave up football to work as a content writer at a national newspaper, where she had a spell as their books columnist.
An avid reader, she was hooked on Sweet Valley High and Point Horror books as a youngster, before turning to crime. Her favorite authors include Michael Connelly, Lee Child and Karin Slaughter.