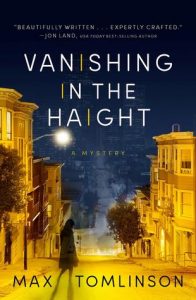 Between fending off a lecherous parole officer and trying to get by in 1978 San Francisco, private investigator Colleen Hayes struggles to put her life back together so she can reconnect with her runaway teenage daughter. Then her life changes dramatically. She accepts a case from wealthy, retired industrialist Edward Copeland. The old man is desperate to solve the brutal murder of his daughter, a murder that took place in Golden Gate Park eleven years earlier―during the Summer of Love. The case has since gone cold, her murderer never found. Now, in his final days, Copeland hires Colleen to find his daughter’s killer in hopes he might die in peace.

Colleen understands what it means to take a life―she spent a decade in prison for killing her ex. Battling her own demons, she immerses herself in San Francisco’s underbelly, where police corruption is rampant. Her investigation turns deadly as she pries for information, yet there is little to go on. However, a song on the radio makes her wonder―did the murdered girl leave any clues that others may have missed?